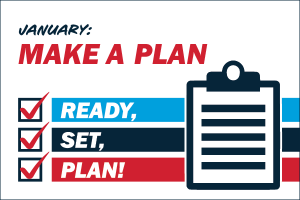 When an emergency happens, you may have to decide what to do very quickly, while you are worrying about what might happen. By planning ahead, it will be easier to make the right decisions when the worst happens.

To understand potential risks in the Chapel Hill area and how to prepare for what may happen on or off campus.

Learn what natural disasters can happen in Chapel Hill and decide what you will do if one were to happen.

Students come to Chapel Hill from throughout North Carolina, the U.S. and the world. You may be familiar with and accustomed to various levels of disasters in your hometowns, and those may or may not vary in severity from what you may experience in Chapel Hill.

The main University campus, covering approximately 800 acres, is in Orange County, located within the Piedmont region of North Carolina. The campus sits on a ridge and encompasses rolling hills and some areas of steep slope. Several small creeks and streams traverse University property. The campus has an abundance of trees, many of which are venerable and quite large, and some parts of the campus are heavily wooded.

The climate of the Piedmont region of North Carolina is temperate. Winter daytime temperatures normally range from the upper 30s to the upper 40s and an average low of 29 degrees Fahrenheit in January. Summer daytime temperatures range from the high 70s to the low 90s and an average high of 89 degrees Fahrenheit in July. The state has a fairly wet climate with an average precipitation for this area of 44-52 inches annually.

Natural hazards that may impact the University:

Plan what to do if you must evacuate.

The University will share guidance on potential evacuations if something like a hurricane, chemical spill or power plant incident forces one to occur. Make sure you get Alert Carolina notifications and follow the information that may come your way. For general guidance purposes, think about what you may do if a need for evacuation arises:

If an evacuation only requires that you move somewhere else in Chapel Hill, be sure to identify a friend in the area who would be okay with you staying with them in an emergency. In the event of an emergency that forces a larger evacuation, be sure to identify family members or friends in other areas that would be safe to shelter with in a larger scale emergency. Choose several just in case different areas of the state may be unsuitable. If you have a car, plan your emergency route and become familiar with surrounding roads. If you do not have a personal vehicle, identify a friend who does that would be willing to evacuate alongside you.

Follow guidance provided through Carolina Housing emails and from your residence hall Community Director or Resident Advisor, as there may be special protocols in place. If there is time to prepare (such as for a hurricane), coordinate with your parents or somebody else you know nearby that may be able to pick you up and transport you safely. If you know anyone with a car on campus, ask if they would be willing to drive you in the event of an evacuation. If you live out of state and can’t fly home, see if a friend that is going a drivable distance would be willing for you to join them.