Home / Adverse Weather News / Hurricane Preparedness Week: Inland Flooding and Assembling Disaster Supplies
This Week is North Carolina’s Hurricane Preparedness Week for 2018
June 1 is the beginning of 2018’s hurricane season for North Carolina, but preparation starts now. Last year was one of the most active hurricane seasons on record in the US, producing six major hurricanes and two of the three costliest hurricanes in US history. UNC-Chapel Hill recognizes the importance of hurricane preparedness, recalling the campus impact from Hurricane Fran in 1996.

The Office of Emergency Management & Planning encourages each student, faculty, and staff member to read the hurricane preparedness information on the National Weather Service in Raleigh website.  The key to effective preparedness is knowing your local risks, developing a plan of action, and having a means of staying informed. Take advantage of our campus safety resources, registering for Alert Carolina, downloading the LiveSafe mobile app, and following the general safety tips, all accessible on our CarolinaSafe website.

The time to prepare is now!

All week long the National Weather Service will issue informative messages to help you prepare for the hurricane season. Today’s topics include inland flooding and assembling disaster supplies.

Inland flooding is the most deadly and serious threat hurricanes bring to inland areas of North Carolina. One of the most devastating storms in our state’s history, Hurricane Matthew in October 2016, generated record flooding across much of the coastal plain of North Carolina, claimed 28 lives, and left thousands homeless and entire towns under water. In September 1999, similar inland flooding occurred with Hurricane Floyd, which claimed 35 lives in North Carolina. Overall, most hurricane deaths over the past 30 years have been the result of flooding, many of which have occurred in automobiles as people attempt to drive through flooded areas where water covers the road.

It is important to realize the amount of rain a tropical system produces is not related to the intensity of the wind. Weak hurricanes and even tropical storms have caused disastrous floods throughout history. For example in 2006, the remnants of Tropical Storm Alberto moved over central North Carolina dropping 4 to 8 inches of rain from Sanford to Raleigh, resulting in major flooding along numerous creeks.

So what can you do? Anytime a hurricane or tropical storm threatens, think flooding. It is very important to determine if you live in an area at risk of flooding. If your yard or nearby roads around your home flood during ordinary thunderstorms, then you are at serious risk of flooding from torrential tropical rainfall. Those living near creeks, streams and drainage ditches should also closely watch water levels. Remember, extreme rainfall events bring extreme flooding typically not experienced in the past. During extreme events even those area which normally do not flood are at risk.

Always stay aware of road conditions and make sure your escape route is not becoming flooded by heavy rain. Never attempt to cross flowing water; instead, remember to turn around, don’t drown. The reason that so many people drown during flooding is because few of them realize the incredible power of water. A mere six inches of fast-moving flood water can knock over an adult. It takes only two feet of rushing water to carry away most vehicles. This includes pickups and SUVs. Never allow children to play near streams, creeks or drainage ditches. As rain water runs off, streams, creeks, and ditches fill with running water that can easily sweep a child away.

Finally, have an emergency action plan and know your homeowners and flood insurance policies. Flood damage is not usually covered by homeowners insurance. Do not make assumptions and remember to check your policies. 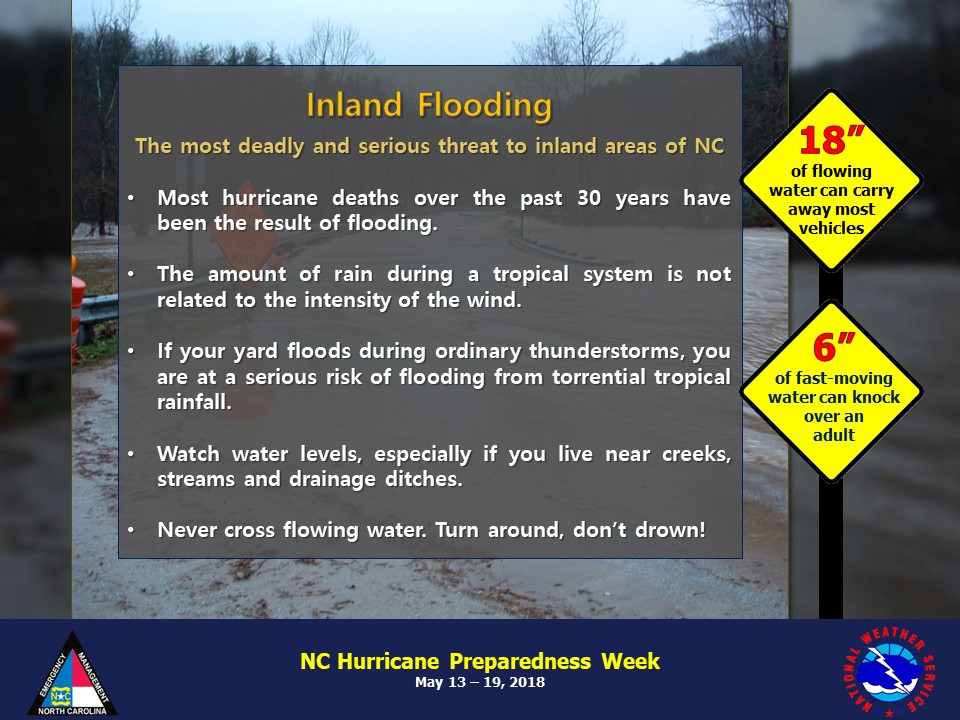 You’re going to need supplies not just to get through the storm but for the potentially lengthy and unpleasant aftermath. Have enough non-perishable food, water and medicine to last each person in your family a minimum of one week. Electricity and water could be out for at least that long. You’ll need extra cash, a 30-day supply of medicines, a battery-powered radio and flashlights. Many of us have cell phones, and they all run on batteries. You’re going to need a portable, crank or solar powered USB charger. Before the storm, be sure to fill up your car or a gas can. If the power goes out, you will be unable to pump gas. To learn more about what to include in your disaster supply kit, please visit FLASH.org. 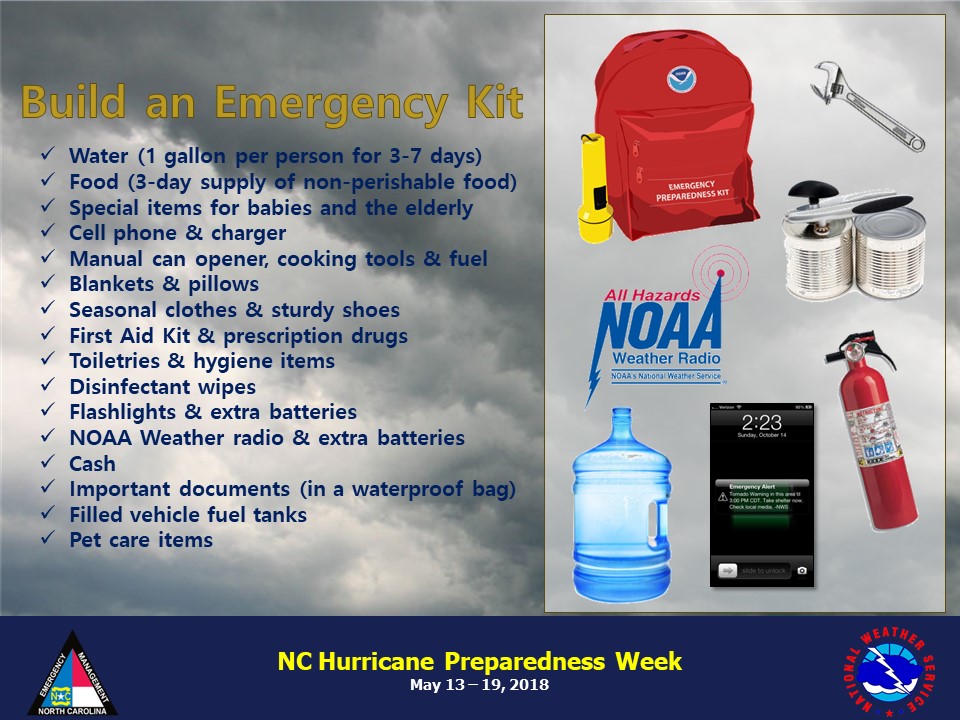